CREEMORE, ON – As first reported in March, Creemore Springs Brewery is bring back its popular seasonal Kellerbier for a second year, this time in larger quantities to help satisfy the overwhelming demand that led to it being an almost instant sell-out in 2009.

The beer is described in a press release as follows:

Kellerbier dates back to the middle ages in small artesian towns in rural Germany. This unusually hoppy beer comes right from the cellar and is naturally cloudy due to the vitamin rich yeast still present in the beer. Kellerbier is lower in carbonation and abundant with hop aroma and flavour. Small batch brewed, this unique beer uses only four natural ingredients and is then packaged unfiltered. Often served as an aperitif before dinner to stimulate the appetite, this surprisingly thirst quenching Kellerbier has a citrus and spicy finish imparted by fresh whole leaf hops and a lavish malt backbone.

Creemore Springs Kellerbier will be available as of May 3rd at a number of LCBO locations and at the brewery in 473 ml cans. It will also be available on draught at select bars and restaurants.

CALGARY, AB – Wild Rose Brewery is getting set to add a new beer to their seasonal rotation. AF23 Pale Ale will be released on May 7th on draught only, and marketing manager Tina Wolfe tells the Calgary Sun that it will be “really hoppy, with nice big flavours”.

Also coming soon from the brewery is a Wild Rose Sampler 12 Pack, which will contain two bottles each of Velvet Fog, WRaspberry Ale, SOB, WRed Ale, Brown Ale and IPA. Launching around the same time will be 12 packs of Velvet Fog and WRaspberry Ale.

VICTORIA, BC – The ever-prolific Phillips Brewing is about to release another seasonal beer, the alien-themed Hop Circle IPA:

More robust than Finagle’s Folly and twice as mighty as Pan-Galactic Gargle Blasters, Phillips new Hop Circle IPA is out of this world. We’re boldly going where no local IPA has gone before and we want you to come along. You don’t need a space helmet or intergalactic vaccinations, just a thirst for the most refreshing IPA this side of Rigel VII.

Hop Circle will be officially launched this Tuesday, April 20th at 4:20 PM with a release party at the brewery. Attendees are encouraged to “come dressed in your most interstellar space getup”, with prizes to be awards for the best costumes.

Brewed using blueberries from the Canadian Fruitful Tree Company in British Columbia, Brewberry is described by the brewery as follows:

Brewberry blueberry ale is a wheat ale that is brewed with an addition of blueberries to the fermented beer. The result is a light straw colour ale with a very slight purple cast from the blueberries and carries a thick white head. The aroma is of fresh blueberries and this follows through to the ﬂ avour. The ﬁnish is fairly dry and slightly tart. All-in-all, a great patio beer for those sunny Alberta summer days.

Alley Kat Brewberry Blueberry Ale is available now in six packs of 341 ml bottles as well as on draught, and can be found at premium liquor stores and select pubs and bars throughout Alberta.

The beer, described as “a favourite for consumers looking for a full taste without a high alcohol volume”, is available now in select liquor stores in BC, and will also be pouring at the Festival.

FREDERICTON, NB – Picaroons Brewing is preparing to release two summer beers in the next couple of months.

The first is the return of their Dooryard Summer Ale, which will come out on Earth Day, April 21st. It’s described as a combination of “the wheat beer traditions of Germany and Belgium with our English open fermentation process. The result is a vibrant, refreshing summer ale highlighted by gentle spice and citrus notes.”

Following on June 1st will be Melonhead, a melon-flavoured wheat beer that was available as a limited draught-only release last summer. This year, it will be available in bottles as well as kegs.

For more information on these and other Picaroons beers, check out Picaroons Pub, the brewery’s social media hub.

VICTORIA, BC – As first announced in early March, Vancouver Island Brewery has crafted a new beer in honour of the 100th Anniversary of the Canadian Navy.

Sea Dog is an amber ale fashioned after the German Altbier style. Like a true Altbier, it is fermented with ale yeast, but at a colder lager temperature. This gives it a clean finish with no esters like a lager, but retaining the malty quality of an ale. Its deep copper colour comes from a heavy addition of dark crystal malt, and a touch of chocolate malt. Sea Dog is lightly bittered, so as to not mask it’s intense maltyness. Most of its hop character comes from a heavy dose of Willamette and Hallertauer hops at the very end of the boil.

Sea Dog Amber Ale is available now on draught in pubs and restaurants in the Victoria area, and in 6-packs at BC government and private liquor stores.

VICTORIA, BC – West coast beer blogs Beer in BC and Love Good Beer report that Phillips Brewing has just released a new seasonal beer, Dr. Funk Dunkel, and is promoting it with a YouTube video:

Dr. Funk Dunkel is available in the latest edition of the Phillips Showcase Mixed Pack, and in growlers at the brewery. 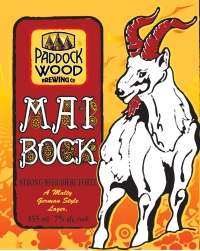 SASKATOON, SK – Paddock Wood Brewing is about to release a new seasonal beer, Maibock. Set to be out in bottles and kegs by the beginning of April, it’s described as “a smooth showcase of malt”.

The brewery will also be represented at the Okanagan Fest-of-Ale in Penticton, BC on April 9th & 10th, where they’ll be pouring the Maibock along with their 606 IPA and Loki double IPA.

KELOWNA, BC – Captivator Doppelbock, the newest beer from Tree Brewing, is set to arrive in BC liquor stores.

This limited edition spring seasonal is described by the brewery as follows:

Captivator Doppelbock offers a sweet aroma with hints of toffee, light caramel and hazelnut. Unpasteurized and free of preservatives, it has a characteristic dark reddish hue. As a limited edition seasonal brew, Captivator will be available starting this week in 650 ml bottles.